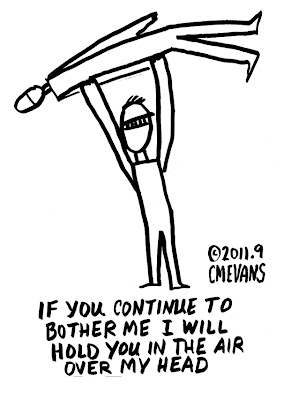 Ahhhh! Attempting to fix one's problems through examples set forth by Greek Mythology, or by employing brute, savage force. I have a soft spot for Mr. Hercules, and his refreshingly direct way at thinking. He made that lion skin work. He could unlock doors with a club. He could wrassle, punch, shoot a bow into the sun, and give good accounting in a set-to. Proto-Superman, a hero before comic-books were comics. Big man in the days when you made it big by being painted on vases, and your profile was chiseled onto stone walls.

"He looked black as night with his bare bow in his hands and his arrow on the string, glaring around as though ever on the point of taking aim. About his breast there was a wondrous golden belt adorned in the most marvelous fashion with bears, wild boars, and lions with gleaming eyes; there was also war, battle, and death...."

Impressive, erratic, given to extremes, crazy, dogged, and loyal. Capable of bumping a pretentious God off the sidewalk on his side of the street. For Hercules, Kryptonite had not been invented yet. CM Evans Cartoons