Cartoon - You Don't Have to Play It 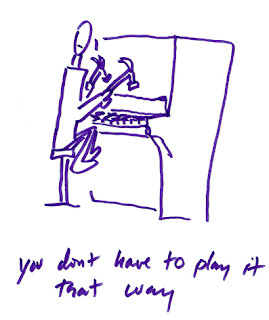 I'm old school. Seriously OLD SCHOOL. How far back? I dunno, I think I drew this "Blue Folio" styled cartoon in about 1885 -- I mean 1985, still in high school & Ronald Reagan was president. CDs were a hot new technology (DVDs were not yet perfected) and we all had to have our Walkmans. ATM machines were starting to show up, New Wave was exploding on MTV and VH1, we were a few years before the first Gulf War. Remember Gulf War I? Kids didn't have cell phones, not even pagers yet, you were cool if you had an answering machine, a beta video tape deck, or an Atari game system. My computer was an Apple II plus with 56K, later upgraded to a smoking 112K with dual floppy disk drives. Did you know the Apple II plus cost about 3K out the door? In 1985! CM Evans Cartoons
Posted by CM at 10:46 AM 2 comments: Sadly, in so many of the conflicts between nations, this is what it boils down to. Brinkmanship and pissing contests. And table-tennis with hand-grenades. CM Evans Cartoons
Posted by CM at 2:45 PM No comments: 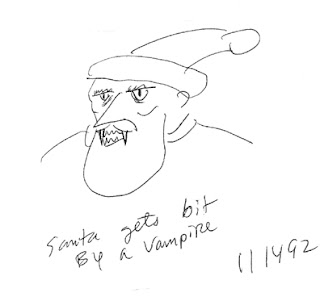 Sheesh! We all know this is virtually impossible. I mean, he's got that sleigh that flies at incredible speed, all over the world in one night to about 3 billion houses, so you figure he must be nimble on his toes. Plus he gets down chimneys, in and out, he's fat and obviously doesn't fit. AND YOU NEVER SEE OR HEAR HIM! Let's face it, Santa must have some supernatural, ninja-like powers. But a dangerous "elder-type" vampire could put the bite on him...ply the old feller with lots of cookies and eggnog, and whiskey, plus a holly spiced cigar. But are vampires on his Good List? Some delicate timing would be required. Plus Santa has those kickass reindeer that would put up a fight if the old feller gave a holler. Uh huh. So don't even try it. CM Evans Cartoons
Posted by CM at 1:42 PM No comments: 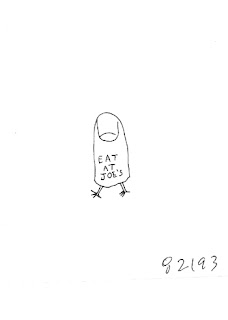 It certainly pays to advertise. CM Evans Cartoons
Posted by CM at 8:08 AM No comments: 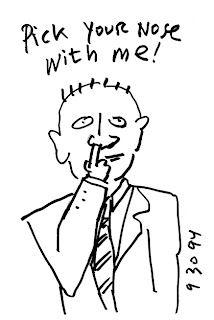 That's right! It is NPYND -- National Pick Your Nose Day! So go ahead and dig deep. I swear, this is true. Look it up. CM Evans Cartoons
Posted by CM at 3:04 PM 1 comment:

Cartoon Redux - Not the Bus

Here's a transmission from the past. When I lived in good old San Francisco, first as a starving student, then as a starving security guard/doorman, then as a starving graphic designer, this happened to me once or twice a month. The good news was, it was a free ride all the way from the front, to the part where it crapped you out the back. CM Evans Cartoons
Posted by CM at 10:20 AM No comments: