Cartoon - One Beer Too Many 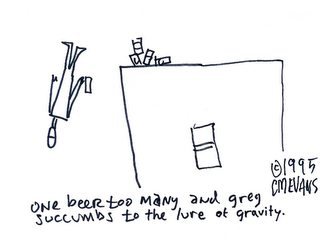 A few years back in S.F., when the moon came up, we decided to have a few drinks on the roof of the second story flat. A girl had a few drinks too many, so she stepped off the roof, thinking she was stepping down onto a wooden kitchen awning. But she was confused and she stepped into an air-shaft that was about 10 feet deep -- she fell without a sound. Next thing she knows, she's standing straight up at the bottom the pitch-back shaft with both her legs jammed through the ceiling of the flat below, with a wooden beam 2 inches between her legs. Instead of screaming, we heard her laughing down there in the dark, while we pulled her out before the cops came. That's what I call the "lure of gravity". CM Evans Kartoons
Posted by CM at 12:38 PM 2 comments: 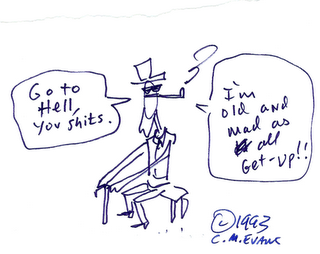 Hello to anyone out there who bothers to read this lousy blog with any reasonable regularity. I hate you all. As I increase with age, literally!, I like it when the olde timey folks tell younguns what is exactly on their mind, and how they feel about whippersnappers in general. Ah, to be young, and to be yelling! Also, may we all be boiled alive in the soup of our own sauce. CM Evans Cartoons
Posted by CM at 2:27 PM No comments:

Hi there -- missed the Tuesday weekly update, mostly due to lack of sleep and 1 or 2 minor, yet irritating technical issues. But we're good to go. CM Evans Cartoons
Posted by CM at 2:07 PM No comments: 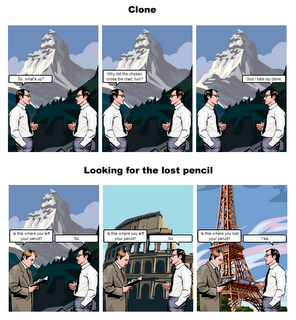 Switching things around a bit here today for the Thursday cartoon update -- this here double panel update is from using the cartoon characters and backgounds from Witty Comics!, where you can make and post cartoons, some of which are extremely funny. I encourage you to go forth and check it out -- I even added it to my links section. I can't believe I didn't have it there before, I think I played with the site about 2 years ago. CM Evans Cartoons
Posted by CM at 11:17 AM No comments: 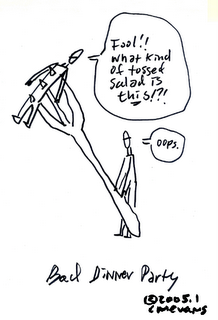 Theoretically this cannot happen, ever. But watch out. Watch out. Do I have any nutty dinner party stories? Dinner party stories of dinner parties gone horribly and terribly wrong? Scenes involving the eating of dinners that should not have been consumed in the venue of a party with certain people? Indeed I do. But go watch "The Party" with Peter Sellers instead. CM Evans' Dangerous and Disastrous Dinner Party Cartoon Website
Posted by CM at 11:37 AM No comments: 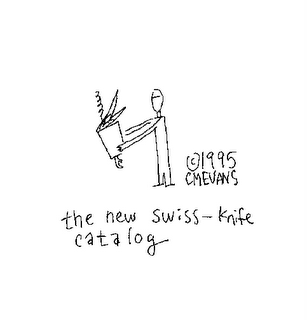 Back to respectability with the latest installment to the CM Evans cartoon website. In college, one job I had was that of a doorman for a swank building on Gough Street in S.F. I got along with everyone quite fine, and part of my job at the end of the day was to take out any recycling or trash that the tenants would put for me to take out in the back stairwell. One thing I discovered was the crème de la crème of society gets FABULOUS catalogs. I mean, these 4 color catalogs were gorgeous, selling all sorts of rare and precious things -- like real Louis the 14th end tables, scrimshaw from the 1820s, rare Arabian firearms, Ming Dynasty pottery, famous paintings, and other stuff that usually is in museums. And everything cost at least $5,000.00 -- and that was cheap. So I'd take these catalogs and read them in my $250.00 a month room in the Mission District, and try to figure where I'd put the end tables if I could afford them, and if they would complement warped wooden floors and chipping paint. I suppose they'd have to do, if I got them to show off my Ming Vase and assorted potpourri of Ancient Scrimshaw. CM Evans Cartoons
Posted by CM at 8:55 AM 2 comments:

Cartoon Plagiarism Over at Wikipedia 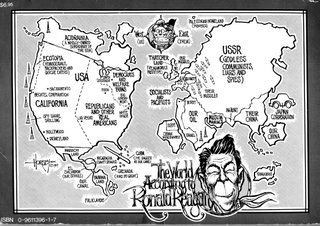 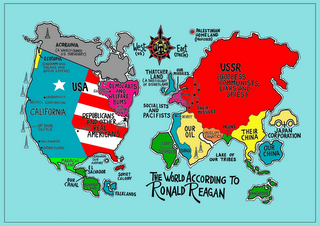 I found this to be interesting -- a bit of political cartoon plagiarism over at Wikipedia -- now don't get me wrong...I love Wikipedia. But I hate plagiarizers. I was looking for the defintion of "Satire" and this is what I found as an example. The color version of the cartoon purports to be the original, according to Wikipdeia, "Published 1984 as a poster by Finnreklama Oy, a printer/publisher of Finland." Here is this Finnish publishing website "Finnreklama Oy - Book Maker", located in Sulkava, Finland.

However, the second black and white cartoon is the original, or a copy of the original, drawn by American Pulitzer-Prize winning political cartoonist David Horsey for the Seattle Post-Intelligencer in 1984. I have my copy from the cartoon compilation ReaganComics, published in 1984 by Carew Papritz and Russ Tremayne, Khyber Press. This illustration is on the back cover.

As often happens with plagiarizers and second-handers, the copied version isn't nearly as good at the original artwork, and the plagiarizer feels free to make a series of inferior changes to some of the text and humorous details. Two notable omissions are the knife-shaped island of Cuba "(The Dagger at our Loins)" and the Reagan Portrait -- the copier also seems to be a rotten artist, see the crude looking bird in the compass that replaced Mom with Apple Pie. Amongst various retitling on the map, the plagiarizer wrote "Lake of Our Tribes" subtitle for the Indian Ocean. Is that the best you can do?
Posted by CM at 10:43 AM No comments: 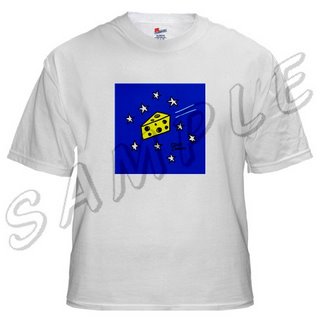 I was stumbling around the old rotten Refreshingly Obscure Online Mercado the other day and discovered the Cosmic Swiss Cheese T-Shirt. One of my favorite products. It comes out looking good, too, as a clock. I think I'll be making some new products this week.
Posted by CM at 11:41 AM No comments: