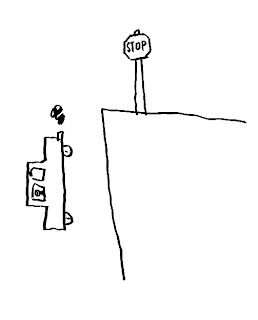 I keep drawing a car going off a cliff. But this time, I deleted the caption. And you know what, it is hilarious. Well, hilarious for me. Ha ha ha ha ha! CM Evans Cartoons
Posted by CM at 8:02 AM No comments: 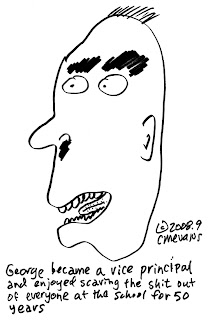 When I was in elementary school, I was scared to death of Mr. Burt, the principal. In his office, he had this big paddle, like a cricket bat, but he never hit anybody with it, as far as I know. But you saw it, standing ready in the corner. He was kind to the kids, but also very severe. He told me something that stuck with me my whole life -- after I had pushed a kid and got into a fight, he said to us, "Two wrongs don't make a right!" And Mr. Burt, wherever you are now, you're right. But also, I realize by posting this satirical cartoon about vice principals, a few of them are going to come by the house now after school, and kick my ass. Plus, my mom was a vice principal. I'm in for a double whammy! CM Evans Cartoons
Posted by CM at 10:06 AM No comments: 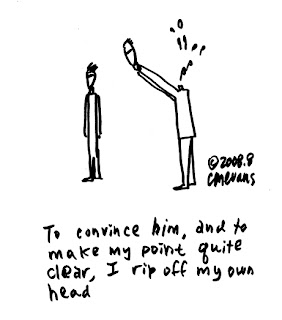 You know, some people require a lot of convincing, when it gets to convincing. Sometimes you have to go the distance with displays, physical ones -- like kicking, slapping, indian-burns, wedgies, melvins, sucker-punches, tripping, pushing, spitting, hollering, windmilling your arms in circles like a helicopter, throwing yourself down on the floor, gyrating your hips furiously, jamming a finger in an eye, tearing at your clothes like a maniac, or ripping off your own head. Now tell me you don't need any more convincing on this point. CM Evans Cartoons
Posted by CM at 10:03 AM No comments: 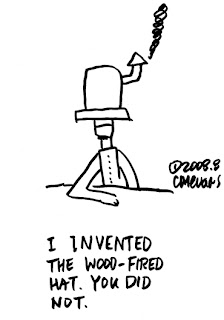 Do you know how hard it is to get the Wood Fired Hat concept to work? I mean, a Gas Fired Hat has been done. Gas Fired Hats are practically for dummies. This Wood Fired Hat works with pellets, soft or hard woods, and has an automatic flue that regulates combustion. CM Evans Cartoons
Posted by CM at 11:04 AM No comments: