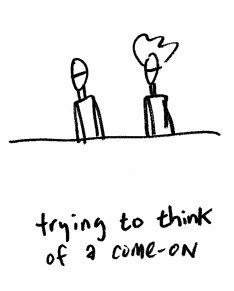 I wanted to post this cartoon yesterday, but I had some bizarre (sp?) computer issues that took me hours to fix. And I'm not sure why what I ended up doing fixed my problems, but no virus(s), and now things seem to be normal. Now, regarding this cartoon, when I was uploading it, I realized that it isn't crystal clear which person is trying to figure out the "come on". The guy or the gal could be the furious figurer, or figuree. Do women work as hard as guys do, trying to figure out what to say? I was never too good at this, so I'd try just coming out and saying I liked them. And that didn't work so well, either. Best "come on" I ever saw was in NYC, with Todd Z, waiting for the train to Brooklyn. Todd can talk to total strangers in this freindly, disarming way -- I thought he knew the girl he was talking to, but then the train came and it wasn't hers and I never saw that beautiful girl again. CM Evans Cartoons
Posted by CM at 10:17 AM No comments: 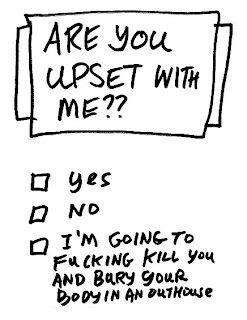 Hey, look at this, fall is here and winter is soon to be dropping in. What a lovely time of year, watching the leaves swirl down the streets in the crisp wind. I've been away for a few weeks. I had to move my office, and my home to a new flat, here in Oak Park, IL. Pardon the interruption. Are you upset? I'll make it up to you. CM Evans Cartoons
Posted by CM at 12:02 PM No comments: